A poet laureate steering committee of community members of poets, readers, and writers will judge the semi-finalists and a poet of national merit will judge the finalists.

In celebration of National Poetry Month, the Eighth Berks County Poet Laureate will be announced in April 2021.

Jayne Relaford Brown is the author of My First Real Tree, a book of poems from FootHills Publications. Her poems have appeared in several literary journals including Blueline,Cider Press Review and Alligator Juniper, as well as in anthologies that include All We Know of Pleasure, El Vuelo del Aguila/The Flight of theEagle: Poetry on the U.S. MexicoBorder, and as the title poem in I AmBecoming the Woman I’ve Wanted. Her poem, “Finding Her Here,” has been widely distributed as a poster, translated into Mandarin and Russian, and was commissioned as a choral work by Anna Crusis Women’s Chorus.Jayne received her Master’s of Fine Arts in Creative Writing/Poetry from San Diego State University, and has been a college writing teacher since 1988. She retired last May from Penn State Berks, where she taught creative writing and composition. 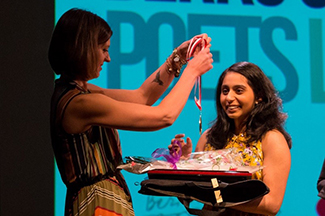 Devanshi Patel, a graduate of Wilson High School, has followed her love of writing since middle school, often writing both fiction and poetry. She has earned several distinctions for her writing, including a Silver Key in the Scholastic Writing Awards for a poem, Woman of Color, and an Honorable Mention for a screenplay, By the Will of the Gods.